The tutorial level is by far the best level in this game. It has a big scale, has step-by-step introductions, and the visuals are stunning seeing for the first time.

And what comes after the tutorial level? There are lots of good level designs, but the overall feeling is just a bit off -- Those level designs are not fully presented in the camera, and because the player cannot see what's happening outside the screen, they do not know when to prepare for a slam to destroy the robots.

I would suggest that keep everything else, but zoom out the camera, and give the player some personal abilities that they can perform without the help of energy rings. With this update, I will be able to do much more things inside the game, on top of hit-and-runs. Keep it up!

Besides all the stunning visuals that everyone talks about. The game is super right on track (Well it is a game about On Track isn't it...). What I mean by that is: the premise of this game is simple and exciting. : run until you are unstoppable. A good controller will handle 90% of all your interaction with the environment, and then a good amount of dedicated time will be put into level design and relaxing particle effect creation moment.

When I played the game, it is already immersive to enjoy the speed and all the wall climbing mechanisms, but I felt a little bit too much when I have to kill a bunch of enemies at the same time.  I feel like it is good to fully develop the pure Parkour aspect of this game first and playtest it. If players feel necessary, the space shooter part will then be happily introduced into play.

What were your favorite moments of the game?

There were so many cool moments in this! Just the menu with its collapsing blocks is such an eye-catching intro; the test commentary throughout the first level is pretty fun, and the variety of abilities is really cool and I think very well introduced. This feels like the kind of game that, after a bit of practice, you could really blaze through the levels in, which I think is really impressive. There’s such a nice flow.

Where do you see room for improvement?

Performance is obviously a big thing, as I guess you guys have already gotten plenty of feedback for, haha. The main other thing I would say is the text; in a lot of ways it seems to be a game about going as fast as possible, but the text just kills that momentum since you have to be completely stopped to read it. If it followed behind you for a big as you went so you had a chance to read it while moving, I think it would be feel much better integrated.

When did you stop playing and why?

I played this a month ago when you guys first submitted it and got to a point (on level 2 or 3?) where I rolled off the edge of the level and couldn’t find my way back. Today I played a bit of the first level again to refresh myself.

What was confusing or intuitive about the interface or controls?

The text problem I mentioned is my main issue with the interface. I do like how the controls are naturally introduced throughout it.

I like the controls a lot! I think they work really well.

What was confusing or intuitive about the game mechanics?

I had some trouble getting through the column you have to dash through; I think I forgot what dash was (or just missed the text sign), and ended up just slamming myself into it until I got past it.

I do think this kind of game with a lot of things going on can suffer a bit when you can just sort of brute force it, so a more gradual introduction of some of this stuff until we can master it might have been helpful (although it’s also largely on me for not reading what dash was properly).

What was frustrating or imaginative about the visual art, or sound design?

The visuals are really cool, although their performance impact not so much.

Do you have any other feedback that you would like the designer to hear?

It feels like you guys put a lot of effort into getting the jump timings right for this, which I think is really cool! The wall jumping especially is really nice and novel for the kind of platformers we usually have in class, I feel like.

I couldn’t play the game on my computer, sadly- however, it looks incredible! I would also recommend adding a Mac build, or a WEBGL build to this page, as to make it more accessible to a wider audience. However, from what I could see from your Demo, visually, it looks quite wonderful! I especially appreciated the motion blur that you had on the camera- it was really quite neat. But, I suppose for future reference, working on optimization of code or finding out what exactly is causing such lag would be quite important! 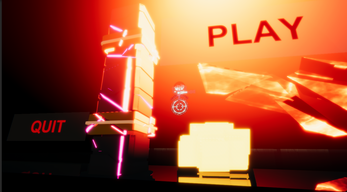